8Bit/Digi was at Silicon Valley Comic Con 2017 and these were the highlights from the weekend. 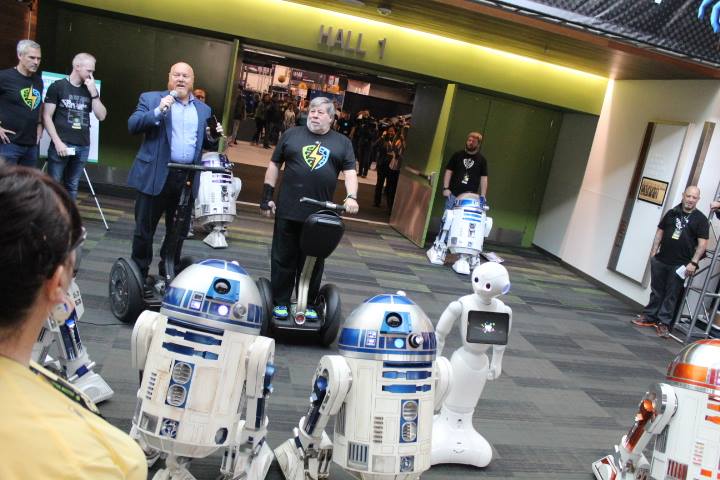 Following the success of last years Silicon Valley Comic Con, Steve Wozniak took the lessons learned to improve the con experience while pushing the event to its limits. The result is a con exsperince that was organized to bring together the world of pop-culture and science while also competing against San Diego Comic Con.

If you enjoyed AOD Con,  Heroes & Villains or just enjoy going to cons then this was your perfect weekend. The event had vendors from all over the West Cost while artist were there to sell copies of their work and celebrities were present to share their story.

This was a special event for members of the press to have a chance to meet before the big weekend. It also gave everyone a chance to meet with Steve Wozniak for some photo opportunities. Personally had a great time chatting with David Crane of DefenseReview, Stephanie Tran of Women Write About Comics along with the team from Earth’s Mightiest Zeroes and Outside Comic-Con.

Silicon Valley Comic Con had over 100 merchants along with 50 artists set up in the Exhibit Hall selling a verity of goods. From figurines, old video games, and collectable merchandise are among the many gems in this treasurer trove. Even if you had no shopping agenda, it’s still fun to look through all the cool stuff and meet the many artists.

Cons are not just about meeting new friends or going into bankruptcy after buying a bunch of collectable memorabilia, it’s also a chance to gain some insight. Silicon Valley Comic Con organized a series of panels that discussed a verity of topics from major stars and industry insiders.

Star Trek: The Next Generation 30th Anniversary was a special event that reunited cast members from the show for a Q&A session with William Shatner. This was a panel mostly dominated by fans who expressed their appreciation for the series. Plenty of shenanigan did happen on stage among the cast members.

Fans of The Walking Dead were in for a treat when they got a chance to hear from Steven Yeun during a special panel. A Spotlight on The Walking Dead‘s Steven Yeun allowed the star to share his thoughts on the the show along with the future of the series. Fans also got the chance to ask question about his career or working on the show.

Everyone could name one John Cusack movie they loved; be it Say Anything or Grosse Pointe Blank. Spotlight: John Cusack was a chance for fans to hear from the star himself while also asking some questions about his career.

The story of the Apollo 11 mission is one that every American should know by heart but it was far more captivating when Buzz Aldrin himself is telling it. Buzz Aldrin: Humanity’s Future in Space was an opportunity for one of the greatest American heroes to shares his life story along with his vision of humanity working together with the goal of going to Mars.

The Flash Q&A with Grant Gustin and Tom Felton was a gift to both Harry Potter fans and fans of the Arrowverse. Both talked about their working relation with he cast and their admiration for the comic series while Felton shared his story of joining the cast following his success in the Harry Potter series. This was also Gustin first appearance at a con and he made the mistake of wearing a Dodgers attire in the Bay Area (we forgave him for this).

While the main event was at the Convention Center and Civic Center, Comic Con transformed the Plaza de César Chávez into a free event for everyone. This was the place to be attendees to get some fresh air and escape the dread of con stank. Several vendors had set up in the park while food trucks were ready to serve the crowd.

Gamers were delighted as both PlayStation and Facebook had a set up a booth in the park. While Facebook was promoting Oculus, PlayStation was promoting both the PS4 and the PSVR. Between the gaming booths were a science fair set up so that local students could present their curiosity of the world to the public.

The highlight of this festival was helping to organize and host the March for Science in San Jose. This national response to the attack on science attracted science supporters and comic con attendees. Among those who spoke out in support of science was Dr. Mayim Bialik, best known for her role as Amy Farrah Fowler on the Big Bang Theory.

No Comic Con story is ever complete without mentioning all the amazing cosplayers that were present. Some worked for authenticity while other added their own personal style. It was not just a photo op with your favorite character but also a chance to learn some tips for anyone who is trying to make their own costume.

Did you get a chance to check out Silicon Valley Comic Con 2017? If so then share your story in the comment section below.