A look at some of the highlights from the FanimeCon 2017 weekend. 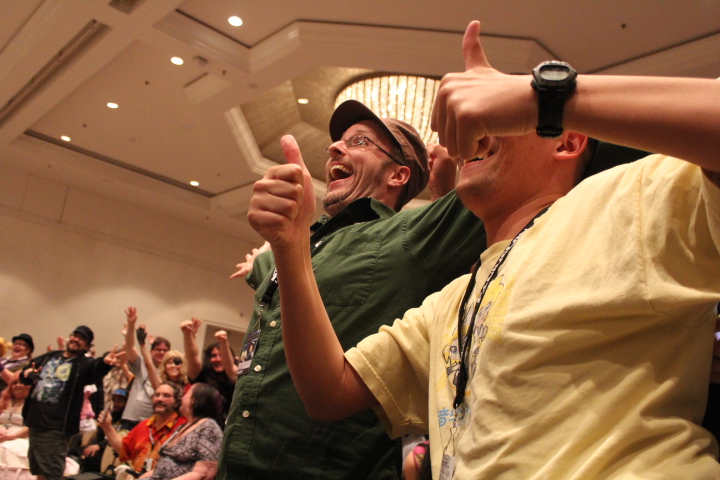 FanimeCon is one of the largest anime fan conventions in North America and described by everyone as the ultimate con weekend. Hence it was 8Bit/Digi‘s obligation to cover the entire weekend and that includes all the after dark fun that happens.

We have had a great time covering events like the Game Developers Conference or Silicon Valley Comic Con, but nothing prepared us for our first time at FanimeCon.

FanimeCon had over 100 merchants set up in SJCC Hall 1 & 2 along with over 50 artists in the Grand Ballroom selling a verity of goods. From figurines, old video games, and collectable merchandise are among the many gems in this treasurer trove. Or one could pick up some amazing designs from respected artists. Even if you had no shopping agenda, it’s still fun to look through all the cool stuff and meet the many artists.

Before the vendor hall and artist alley could be open, attendees who wanted their shopping done early could hit the swap meet on Thursday and Friday night. This was the perfect chance to find something rare or unique among the many independent vendors who just wanted to unload their merchandise. Many of the merchants were surprised how fast their stuff sold on Thursday and were concerned they may lack inventor for Friday.

There was no shortage of activities during the weekend, from board games to foam sword fights and video games. Being bored during this weekend was a personal choice and a sign of one being a buzz kill. Here are some of the activities one could stumble upon:

The Gaming Hall had a verity of options from table top games to PC games and arcade games. Friends could get gather for a dance-off over a game of Just Dance or Dance Dance Revolution. Desktops were also setup for those who wanted to play StarCraft II or launch a raid in the World of Warcraft. Best of all, the gaming hall is open 24/7 which is perfect for anyone who wants to play Overwatch at 5am.

Fanimaid Cafe was the maid cafe of the convention and was located at the Fairmount Hotel. Guest got to enjoy some tasty treats while playing fun games or watching a live performance by the staff.

Did you want more action during the weekend or wanted to learn how to be a badass, if so then you should have checked out the many self-defense classes. Two classes offered advice for women who were tired of dealing with creeps while one classes offered lessons on Krav Maga.

Speed Dating was the perfect opportunity for singles to hook up during the FanimeCon weekend. Several sessions were set up that gave singles the opportunity to hook up or get to know each other.

Cons are not just about meeting new friends or going into bankruptcy after buying a bunch of collectable memorabilia, it’s also a chance to gain some insight. FanimeCon organized a series of panels that discussed a verity of topics from major stars and industry insiders.

Steven Savage hosted two insightful panels . In the first panel, he partners with Bonnie Walling to examine the impact the Sailor Moon series has had on women in North America. During the second panel, he is joined with several authors to discus the benefits and challenges of self-publishing a book.

The Foundation for the Preservation of Gen 1 Pokemon was back with several insightful panels. They started the weekend with “Fifth Gen is not Pokémon” followed by “Console Wars” and ended all with “Make Anime Great Again”.

Q&A with the Nostalgia Critic was one of the most popular panels as fans got a chance to gain some insight from Doug Walker. One of the highlights from this panel was an official confirmation that Norm of the North will be the subject of an episode sometime in July.

Hideo Kojima was a fan panel that looked into the career of one the gaming worlds biggest rock stars. The host examined his early works like Metal Gear and Snatchers along with the influence his work would have in regards to storytelling in gaming.

Cthulhu for President was back for a tenth year of trying to convince the audience on why we need to elect the Dark Lord Cthulhu as President of the United States. If elected, Cthulhu vows to end the worlds stupid and make America go crazy again. The panel ends with a Q&A that was more about the audience being ridiculed for asking a question.

Q&A with Lauren Landa gave Sailor Moon fans the chance to ask her all kinds of questions. Among the subjects discussed was how Landa got into voice acting along with how she has tried define her role as the voice of Sailor Neptune for a new generation.

One of the highlights of every major anime con in the Bay Area, the Cosplay Wresting Federation was back with another unforgettable show. A verity of iconic characters from video games, comics and anime all lay the smack down in an attempt to claim championship belt away from Phoenix Wright.

Oh the (Animated) Horror is an in-depth look at the most iconic horror manga and anime. This was the perfect panel for horror buffs.

No FanimeCon story is ever complete without mentioning all the amazing cosplayers that were present. Some worked for authenticity while other added their own personal style (especially the Deadpool’s). It was not just a photo op with your favorite character but also a chance to learn some tips for anyone who is trying to make their own costume.

There were also several scheduled gatherings were cosplayers from a media franchise could get together for a photo shoot. It should be noted that this year saw one of the largest gatherings of Overwatch cosplayers. Outside of the official gatherings, a group of Team Skull cosplayers staged a mock showdown with a legion of Deadpool cosplayers (shenanigans and chimichangas were plentiful).

This was more then just a weekend to geek out but also the perfect moment to ask that special someone for their hand in marriage. There were several moment during the weekend when someone asked their special someone to make them the happiest person at Fanime.

Final Thoughts for a First Timer

Ever since I started 8Bit/Digi back in September 2015, I’ve had the pleasure of attending a verity of fan conventions in the Bay Area. Twice I’ve been to Silicon Valley Comic Con, spent an entire weekend at Kraken Con, and kicked back at AOD Con. FanimeCon however was a unique experience that could be described as the Burning Man of fandom. This was an unforgettable weekend and I do plan on returning for FanimeCon 2018.

Did you get a chance to check out FanimeCon 2017? If so then share your story in the comment section below.

Disclaimer: FanimeCon provided us with passes for the weekend.