The first day of Kraken Con provided fans a sample of what they will experience during the weekend. 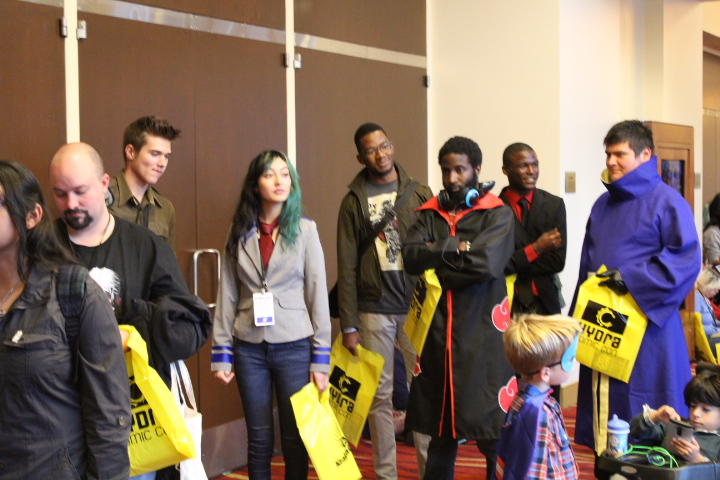 The first day of Kraken Con 2016 started smoothly as the early bird attendees got a sample of what they can expect during the weekend. It was an opportunity to check out what’s on the floor along with meeting some of the artists and guests who will be sharing their wisdom during the weekend.

While waiting for everything to begin, guests mingled outside the convention halls. It was a time to meet new friends or be reacquainted with familiar faces. It was also the best chance to get a photo shoot of the best or most creative cosplayers.

The convention floor was broken up between the many shop vendors, artists booths, a mini-theater, card games tournaments, a video game setup, and a stage for the main events. Despite the many games setup, most of the crowd was watching gamers battle it out on Super Smash Bros. for the Wii U. The main event of the night was a musical performances by Ayakashi and Professor Shyguy.

The first guest I had to chance to meet was Ethen Beavers, comic artist who has worked on adaptations of Samurai Jack and Star Wars: The Clone Wars. Surprisingly I actually first meet him in the elevator as we were both on our way to the convention. It was at his booth I got to really learn more about his work

Another guests I had the honor to meet was Jason B. Thompson, known as the creator Mangaka: The Fast & Furious Game of Drawing Comics along with the author of Manga: The Complete Guide and is the Manga Editor of Otaku USA. During my visit to his booth, he went more in-depth about creating his game and what to expect during his panel.

Outside the convention, small vendors have setup their own market while offering a verity of merchandise. One could find a collection of used DVD’s and video games or hard to find merchandise such as action figures or movie posters. This was a perfect sample of what Kraken Con is like for those who were staying at the Marriott for the Intel Masters Tournament.

The final event of the night was a chance to meet the guests of honor of Kraken Con. Hosted by David Studebake, attendees got a chance to be introduced to Charlet Chung, Kimberly Brooks, Max Mittelman and Kyle Hebert. Each one will have their own special panel during the weekend.

The convention was closed at 9:30 but guests could still play video games up until midnight. Today’s event was only a sample of what could be expected all through the weekend.