A look back at the legacy of the game that help redefined the Real Time Strategy genre in the early 2000’s.

The early 2000’s was an era that was defined by the 9/11 Attack and the War on Terror that followed. It was also an era that saw the People’s Republic of China. It was unclear what the future would be like but Electronic Arts attempted to create a new world based on this geopolitics atmosphere in Command & Conquer: Generals/

Command & Conquer: Generals was a game created during a crossroad in world history and a reflection of what many expected of the future. This was the first game in the series to not take place in the Red Alert / Tiberium timeline but instead a semi-modern world. With a new world and style, Electronic Arts took a major risk with a popular franchise and in the end redefined the RTS genre once again.

February 10th will mark the 15th anniversary of when Command & Conquer: Generals was first released on the PC. This is a look into how the series that help create the RTS genre would modernize it for a new generation. 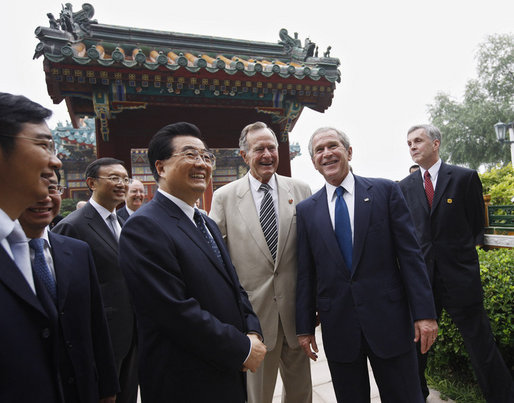 Looking back, Command & Conquer: Generals could easily be described as a byproduct of two major global events. The first was the early years of the War on Terror and the second is the emergence of the middle class in the People’s Republic of China.

In regards to current events; the horror America experienced during the September 11 attacks was still fresh in our mind and we wanted vengeance. In no time President George W. Bush along with our Allies declared a War on Terror against Al-Qeda. The United States along with NATO forces had successfully liberated Afghanistan from Taliban rule and were on the hunt for Osama Bin Laden. At the same time, the Bush Administration was pushing its plans to invade Iraq and oust Saddam Hussein.

In the People’s Republic of China; the country had undergone a series of reforms in the 90’s that would become the foundation of its economic prosperity. Under the leadership of Jiang Zemin, China grew to have the largest manufacturing economy while also seeing a GDP growth rate of 10% every year until 2015. This economic boom also paved the way for the emergence of a middle class that would reshape the social-economic landscape of China. By the late 2002 and early 2003, Zemin tenure was coming to an end and he would be succeeded by Hu Jintao (who would continue to build China’s prosperity).

Wanting to capitalize on the rise of China along with the War on Terror, the world of Command & Conquer: Generals embodied both of these global events. A future were China and the United States work together in a war against terrorists.

The Future War on Terror

Command & Conquer: Generals introduced a new story that was free from the Tiberium / Red Alert story arch and rooted in the current events of the era. The story follows an international conflict with the United States of America and the People’s Republic of China (the two world Superpowers) at war with the Global Liberation Army (a stand in for Al-Qeda).

The war begins when the GLA launchs a series of attacks against China in the hopes of curtailing their rising influence on the world stage. The attacks only unleash a new sense of patriotism and the Peoples Liberation Army is mobilized to fight this growing threat. The attacks also prompts the United States to act against the GLA by deploying their forces to the Middle East and North Africa. In the beginning; the Chinese must force the GLA out of their borders while the US works to hit their footholds in the Middle East.

Following a series of victories; the American and Chinese military have contained the GLA in Kazakhstan. A joint operation has American and Chinses forces make their way into Akmola and liberate it from the remanence of the GLA – achieving the final victory.

Note: This synopsis only takes the original game to account and not the Zero Hour expansion.

While maintaining the standard mechanics of its predecessors; Command & Conquer: Generals was the first game in the series to be set in a full 3D environment. Each faction has their advantages and disadvantages – the US faction is more technologically advanced while the Chinese unites are much stronger and the GLA specialize in guerilla tactics. New gameplay features were introduced such as upgrading the armory of units (now a standard in most RTS games).

At the time of its release, Command & Conquer: Generals was universally praised by both fans and critics for redefining the RTS genre while taking a huge risk. The game was praised for successfully making the jump to a 3D environment while being rich in replay value with its multiplayer and skirmish mode. Fans also enjoyed the games emphasis on urban combat while also improving the aerial combat. Its success was followed up with Zero Hour, an expansion that added new gameplay features along with new units.

Despite the many praise it received; Generals was met with some controversy after its launch. The game was banned in the Peoples Republic of China due to the depiction of the country being attacked by terrorists and the PLA being allowed to use nuclear weapons as a conventional weapon. The game was also banned in Germany due to the impending war in Iraq as the BPjM felt the game could be used to promote a false narrative about the conflict.

Sadly for fans, the years have not been kind to this once ground breaking title. Plans for a follow up had been in the works for sometime but the project never gain much traction. Following the failure of Tiberian Twilight, there was hope that Generals 2 would bring new life into the series. However; after numerous changes to the project and botched launches by EA, the project was canceled while the series was left in limbo.

It has been 15 years since Command & Conquer: Generals was released for the PC but it has left a lasting legacy in the gaming world. While its future remains in limbo, old school gamers continue to preserve its legacy with their many battles and skirmishes online.

Did you play Command & Conquer: Generals and what was your reaction upon completing the game? Share your thoughts in the comment section below.