Back in 2014; Machine Games took the iconic shooter and rebranded it while crafting it a thought provoking story. The result was Wolfenstein: The New Order, a comeback for the game that started the shooter genre while also being one of the most layered titles ever made. It’s follow up, Wolfenstein II: The New Colossus comes at time when the moral soul of America is at war between tolerance and reason against the acceptance of intolerance.

2017 has been a politically turbulent year in America and it has been heavily reflected in the gaming world with World War II games making a massive comeback. Sniper Elite 4 and Day of Infamy were two highly praised titles while Call of Duty is returning to its roots later this year. Finally you have Wolfenstein II: The New Colossus continuing the story B.J. Blazkowicz.

It’s going to be impossible to talk about Wolfenstein II: The New Colossus without making it political. A game about fighting against Nazi’s in America has become a dream title for many angry voters and an outrageous work of “tolerant left” propaganda for those on the political right. Regardless if one even doesn’t affiliates with the Alt-Right, those with conservatives have already felt that the game is an attack against their values.

A Simple Shooter With a Complex Story

Following the events of The New Order, players will once again take on the role of William “B.J.” Blazkowicz as he fights to free the world from Nazi tyranny. After taking out Wilhelm “Deathshead” Strasse, the Kreisau Circle comes to America in the hopes of joining up with the resistance and sparking an uprising against the occupation. Yet to the disgust of Blazkowicz, he comes to an America that has opened up to the occupation and now must remind them what it means to be free.

The Wolfenstein reboot has been unique among World War II themed shooters as they also focus on why the Third Reich has become synonymous with evil. Players are brought to an America were minority groups have been rounded-up and either placed in ghettos or exterminated while the Klu Klux Klan has a firm grip on the South. While the bulk of the enemy will be the Wehrmacht, players will also have to go up against a few Quislings. Here is when The New Colossus also gets politically by reminding players that the politics of the Klan are same as the Third Reich while America’s true power comes from its divers but unified communities.

One thing that has rarely been acknowledged about the reboots is how Blazkowicz has transformed from a simple generic action hero to a more complex character. This more true than ever in The New Colossus as we see a broken hero while also learning that he has been dealing with bigotry since his childhood in the form of his abusive father. While the backstory of an abusive father may seem cliche, Rip Blazkowicz is depicted more as a man wanting to harden his son. At the same time gamers are shown a few pleasant memories from this relationship, which make his betrayal more heartbreaking.

While the story is deep, there are moments that do undermine the overall tone. This is best seen when Blazkowicz is resurrected or when they go to Venus. Even though the game has many elements of science fiction, these moments feel more out of place and end up undermining the overall tone. 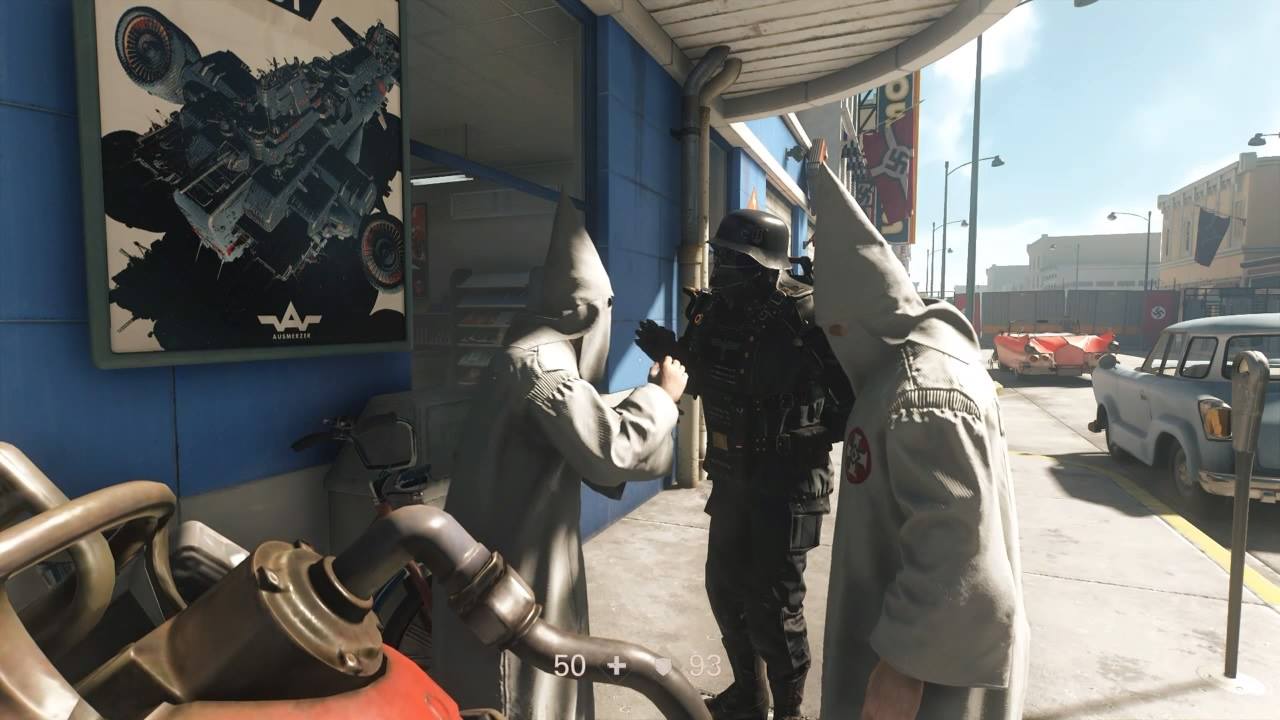 There really isn’t much to say about the gameplay as almost nothing has really changed with the exception of a few minor tweaks. The one noticeable change is there is a lot more blood and guts than previous installments. However I don’t mean this in a negative way as this is still a fast paced shooter that has all the elements of the classic game along with a few modern features.

Lacking innovative gameplay, The New Colossus is more of a story driven game with complex characters. While having established the shooter genre with a basic story “killing Nazi’s”, Wolfenstein is now a story rich experience while Blazkowicz is no longer a generic action hero. Instead of having resources wasted on unneeded gimmicks, Machine Games has successfully crafted one of the best stories in gaming that could rival The Last of Us or Metal Gear Solid 3 in terms of quality.

Wolfenstein II: The New Colossus is an old school shooter with a thought provoking and multi-layered story. It’s a reminder of why the Third Reich has been synonyms with evil while giving more depth to a familiar hero.

Disclaimer: I bought this game from my local GameStop.