Horror Game Icon looks back at the legacy of The Thing and how it beat the odds to become a masterpiece in its own right.

Back in 1982,  John Carpenter redefined the horror genre with The Thing , a masterpiece that blends the elements of paranoia and science-fiction. Today it has been hailed as one of the greatest work of modern horror and a staple of both 80’s horror and Carpenters work.

The movie focuses on a research team in Antarctica being terrorized by parasitic extraterrestrial that assimilates other organisms. After a series of confirmations against the creature and moments of paranoia among the team; the film concludes with R.J. MacReady (Kurt Russell) and Childs (Keith David) left as either the only survivors or infected. Unfortunately the movie ends leaving audiences wondering what happen to the survivors.

Then in 2001 it was announced that a video game adaptation of The Thing was in the works with a release date set for 2002. The game would finally answer that long awaited question of what happened to MacReady and Childs. Horror Game Icon will now look back at how this follow up that defied expectations to bring closer to one of the greatest horror films ever. 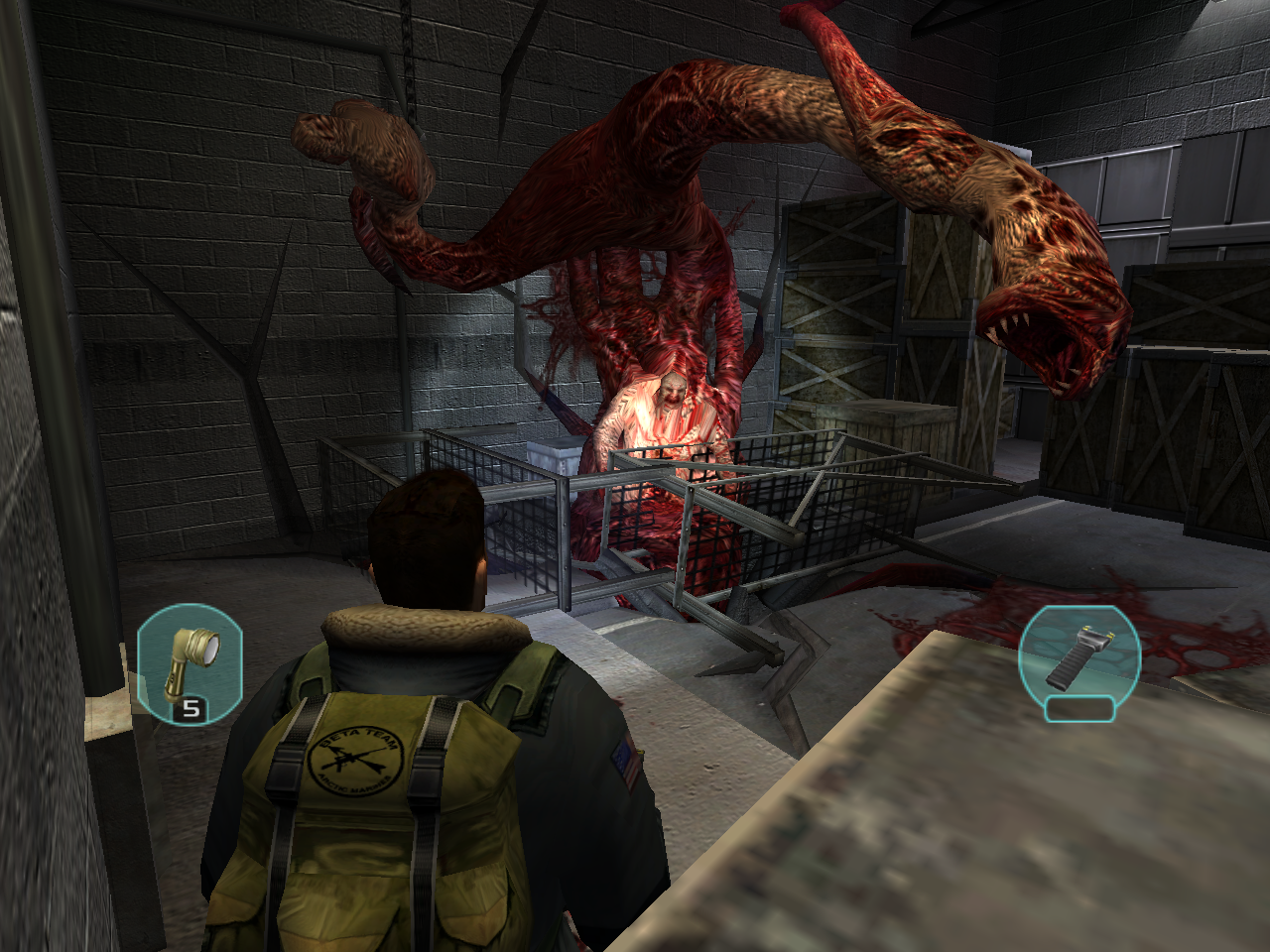 Set three months after the events of the movie; a military unit has been deployed to investigate the radio silence at Outpost 31. Players take on the role of J.F. Blake (captain of Alpha team) who is investigating the remains of the outpost. However when contact is lost with Bravo Team at the Norwegian Outpost; Blake is deployed to find them only to encounter the creature. The situation goes from bad to worse when it’s discovered that a bio-engineering company has set up a secret lab in hopes of weaponizing the creature.

Subduing paranoia is the key element to the game as you don’t know who is human and neither do your teammates. With the fear system, the squad reacts to the situation or environment of an area. Failure to control a teammate’s fear may result in the individual to breakdown and attack the squad or commit suicide. It should be noted that The Thing is one of the few games to feature onscreen suicide; something also rarely featured in cinema. Fighting the Thing is also a major challenge as it requires the player first to shoot it multiple times just to weaken it and then burn it with a flamethrower.

The game setting features many references to the film such as Blair’s UFO, MacReady’s recordings and a large chunk of ice that was dug by the Norwegian team. Besides memorable moments from the film, John Carpenter himself appears in the game in the role of Dr. Shaun Faraday 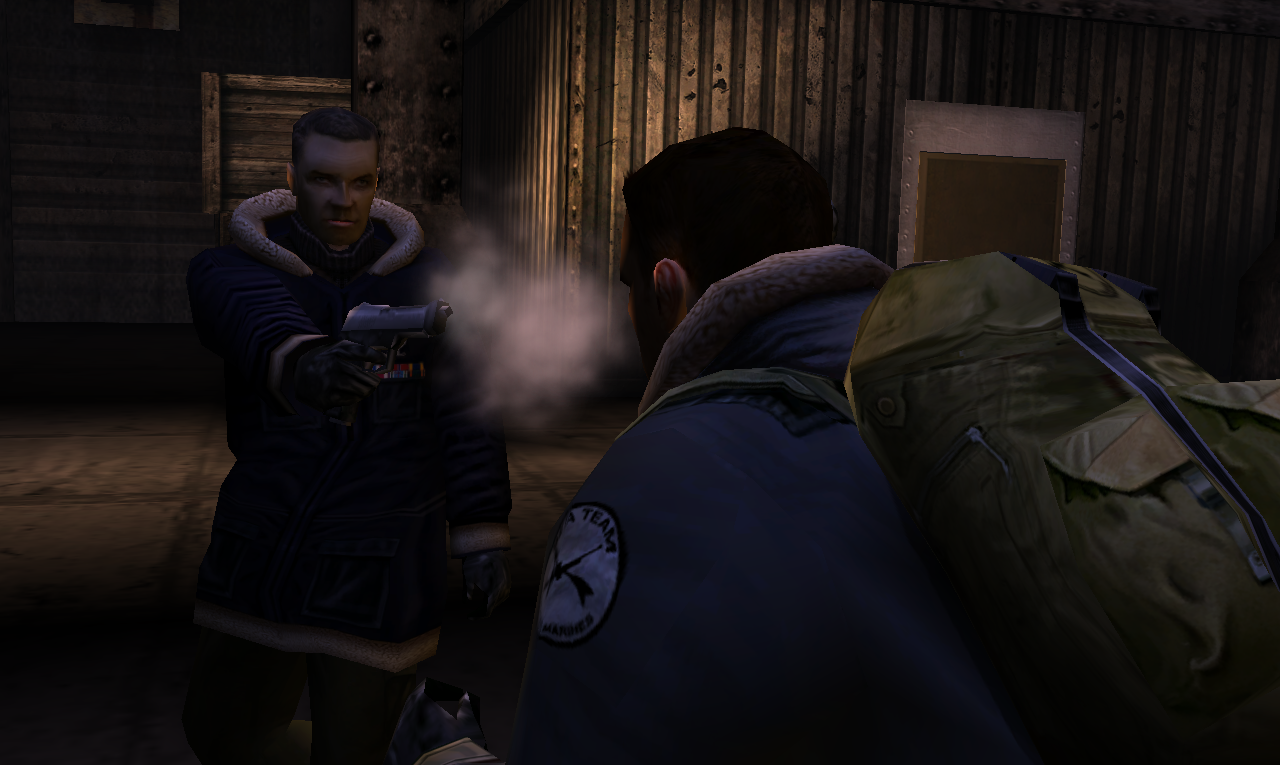 For how little faith critics had; The Thing has lived up to the expectations of the original film. Upon its release; The Thing was highly praised by game critics. Based on data gathered by Game Ranking.com; the PlayStation 2 version received a score of 80% while the PC version received 78% and the Xbox version earned a score of 77%. To be fair; critics and gamers had very little expectations for The Thing back in 2002 as this was still an era when movie-games were seen as guaranteed failures with the only successful one being 007 GoldenEye.

Despite its shortcomings, many horror fans have praised The Thing for staying true to the source material. Despite the many comics, side stories and that one awful prequel that dosn’t count, many fans consider the game to be a true follow up to the iconic film. It continued the story while also bring some much needed closer to the story of MacReady and Childs.

It’s only a shame that the game has not been remastered or remade for the Eight-Generation Consoles as a means to preserve its legacy.

The Thing was released at a time when Resident Evil dominated the horror genre, movie games were seen as cheap cash grabs and having to bring closure to one of the greatest works of modern horror. Despite the odds stacked against them, the team at Computer Artworks have made John Carpenter proud.

Did you ever play The Thing and what are your thoughts on it? Let us know in the comment section.