From insightful panels to amazing people, these are the highlights from DeveloperWeek SF Bay Area 2018. 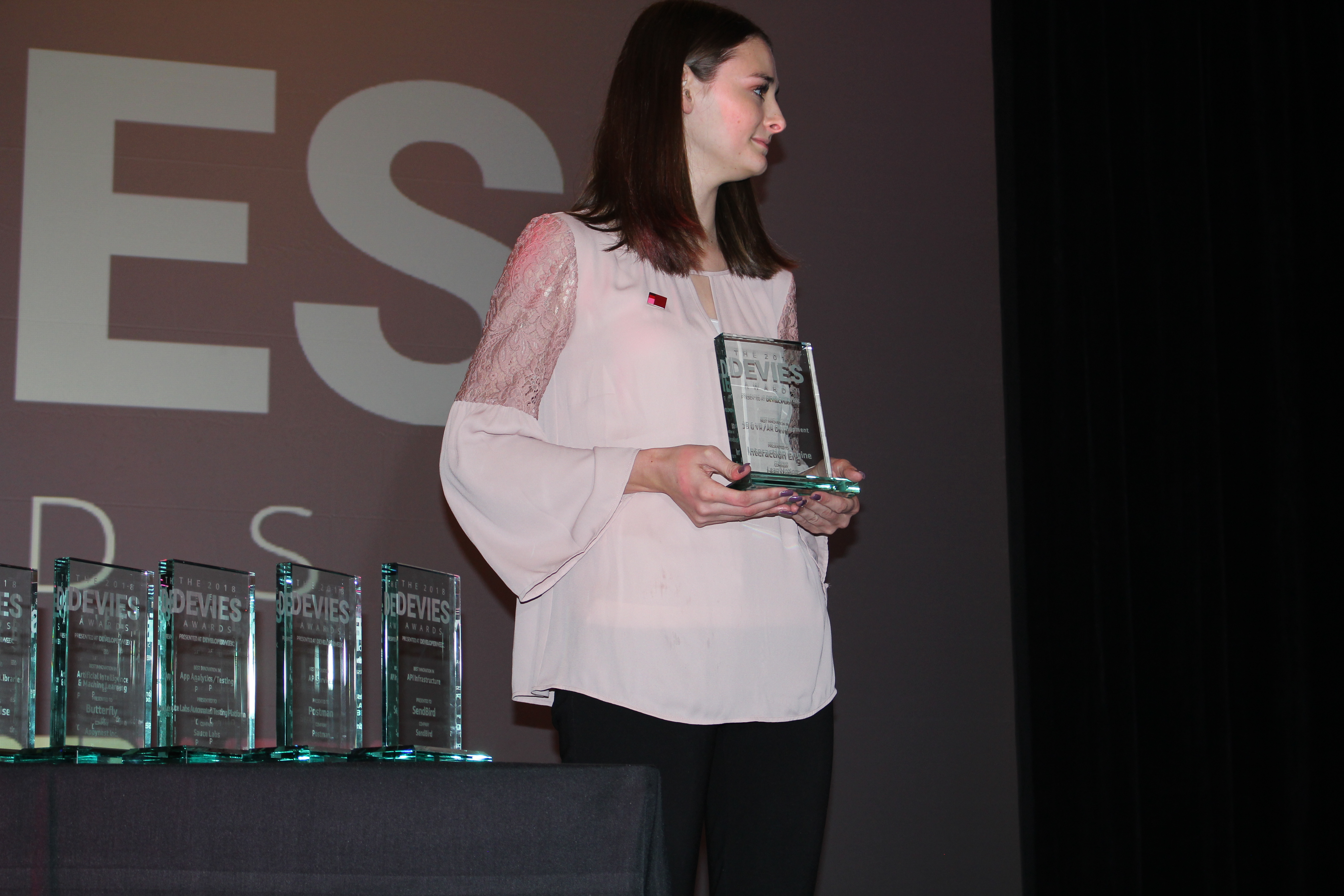 DevelopersWeek SF Bay Area is one of the largest conferences and expo for developers. The event brings together major companies along with prominent start-ups for an opportunity to learn about the latest trends in the tech industry.

This five day event allowed developers from all industries to gather for an opportunity to network among themselves, learn new skills and discover trends with in the industry. 8Bit/Digi was present during DevWeek 2018 and these are the highlights from the conference.

The expo floor had a good number of major and start up tech companies setup who wanted to share their work while also on the look out for new talent. Each booth allowed guests to learn about the company and the projects they are working on. Many also had demos setup that allowed guests to get a sample of their services.

Here are some of the booths I got to check out and people I meet on the expo floor:

VASCO Data Security was the first booth I got to check out when entering the Expo Floor. They specialize is digital security and were present to promote their system while disusing the need to include security in your apps. I got the chance to have chat with Will LaSala about the work that VASCO is doing and what they hope to gain during the conference.

Hibernating Rhinos is a software company that is best known for the Entity Framework Profiler and the NHibernate Profiler. During the week, the focus was on promoting the their NoSQL document database called RavenDB. I was able to have good chat with CEO Oren Eini along with Judah Gabriel about the advantages that RavenDB has over other NoSQL document databases.

Linode is a private server provider that is well known for its cloud-hosting services, which is used by over 400,000 clients. Vistors to their booth could learn all about their work or pick up essentials they forgot to bring (like a phone charger).

AppDome is a cloud-based service that speeds mobile service integration and SDK implementations without code or coding. I got the chance to better learn about their work after having a chat with Avi Yehuda, CTO and Founder.

Scaled Inference was present to demonstrate and promote their AI platform. Vistors to the booth got an in-depth look at Amp.ai and better learn of how it could help business.

TIBCO Software is well known for their work in providing integration and analytic software for companies. They present to share their work while also hosting a raffle with winners eligible to receive some awesome prizes.

A pioneer in software development, CA Technologies had a major presence on the Expo Floor. They are well known for their work in mainframe software along with work in distributed computing and cloud computing. I got the chance to chat with the team and learn about the work they’re currently doing. 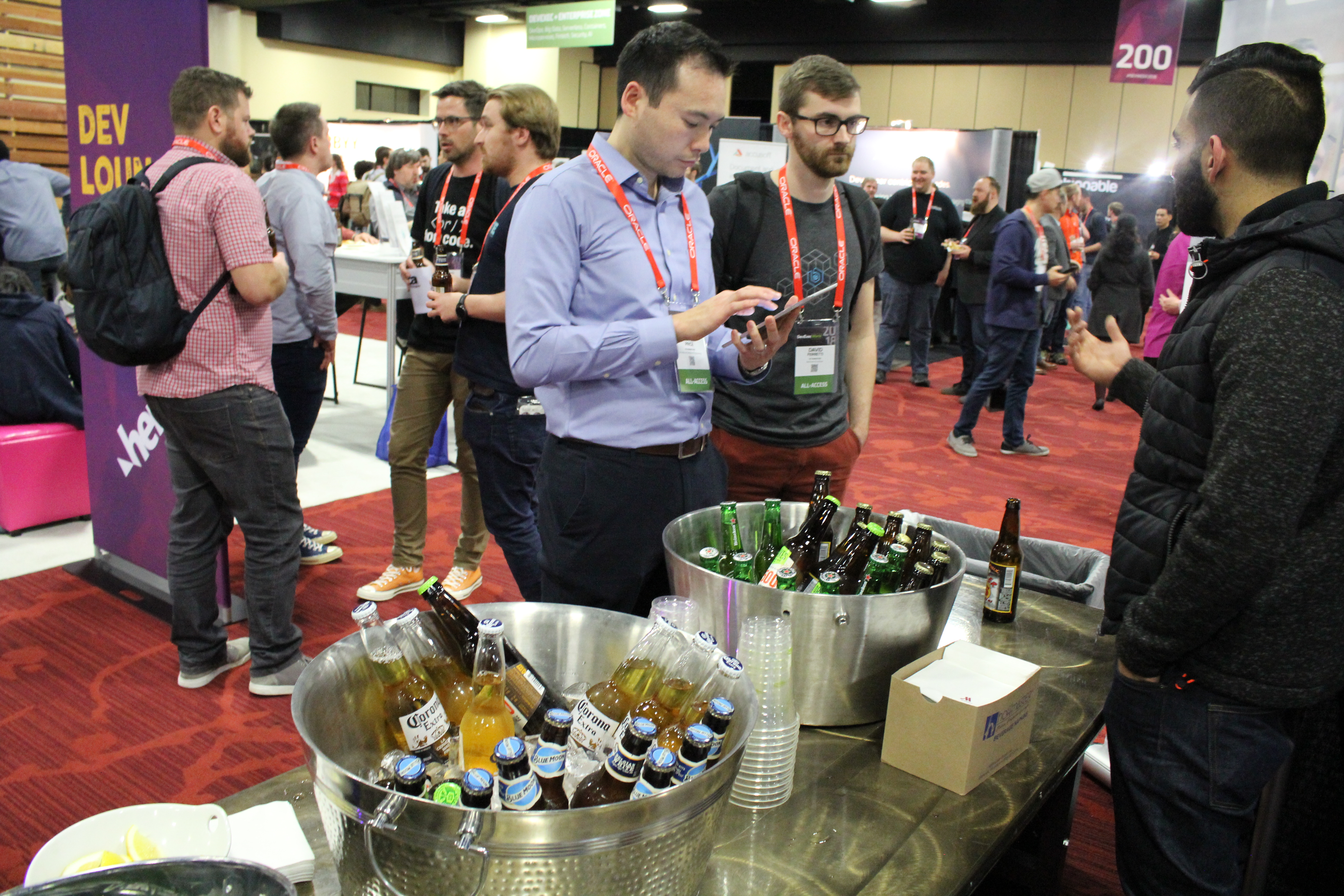 When Tuesday came to an end, guests gathered at the expo floor for the Expo Block Party. This was an opportunity for everyone to relax after a long day with some good food, a few brews and the company of new friends. Guests got to have some one-on-one with the speakers or hang out at their favorite booth for some personal time. There were also a few games set up just for fun.

Industry conventions are mostly about learning of the new trends along with what to expect in the future. DevWeek organized a series of panels and workshops that discussed a verity of topics given by industry insiders about emerging trends along with major issues. One of the most common themes discussed was the need for companies to start taking security seriously.

The Industrial Revolution of Code is a workshop hosted by Marco Pescosolido. The presentation begins by comparing the invention of the steam engine with the need to understand low code platform. With the rise of technology in every business, Pescosolido examines how low code is the bridge between service software and the need to learn how to code.

Why Does Security matter for DevOps hosted by Carolina Wong looks into the need to invest in security. Her presentation focused on how most companies neglects the importance of software security and how they could

Enable Content Development 360 Video Streaming AI was hosted by Dr. Shannon Chen and it explores how Facebook is working to develop quality 360 images. This was an inside look into how AI and VR technology is being used to develop Facebooks latest 360 video system, Content Dependent Streaming (CDS).

The Devies is an award presenting during DevWeek to honor the best services, software or projects in the industry. There are numerous categories and the winners are selected by the DeveloperWeek Advisory Board. The winners of the 2018 Devies Awards are:

Open Talks were a series of short panels that were open to everyone and discussed a verity of topics. Each one had a 30 -45 min presentation followed by a Q&A session. Most of them could be found on the expo floor with a few located in other conference rooms.

How to put the Sec in DevOps with Matt Rose looks into how DevOps is changing the industry but current security plans are failing to protect the work. This discussion looks into how organizations have adopted security into their DevOps processes while addressing the challenges that many face.

An Intelligent Database that Works on It’s Own hosted by Oren Eini of Hibernating Rhinos was a discussion about the efficiency of an intelligent database for an organization. Using the the key features of RavenDB as an example, this open talk demonstrated how an intelligent database could take care of itself without the need for manual oversight along with how the system could be optimized based on its internal behavior.

Why and How to Build Self-Optimizing Software with AI was hosted by Scaled Inference CEO Olcan Sercinoglu and was both an open discussion along with a demonstration. This was a look into how to build a better software using AI using a system that is self-optimization and surprisingly simple. There was also a presentation of real world uses for Inference systems such as Amp.ai.

DevWeek was not just about going to panels, checking out the industry on the Expo Floor and learning new trends. It’s also an opportunity to network with others in the industry and build new relationships. Several mixers were organized during the week and held at venues around Downtown Oakland and San Francisco.

Did you get a chance to checkout the DevelopersWeek SF Bay Area 2018? If so then please share your experience or thoughts in the comment section below.

Disclaimer: DevWeek provided us with press passes to cover the event.