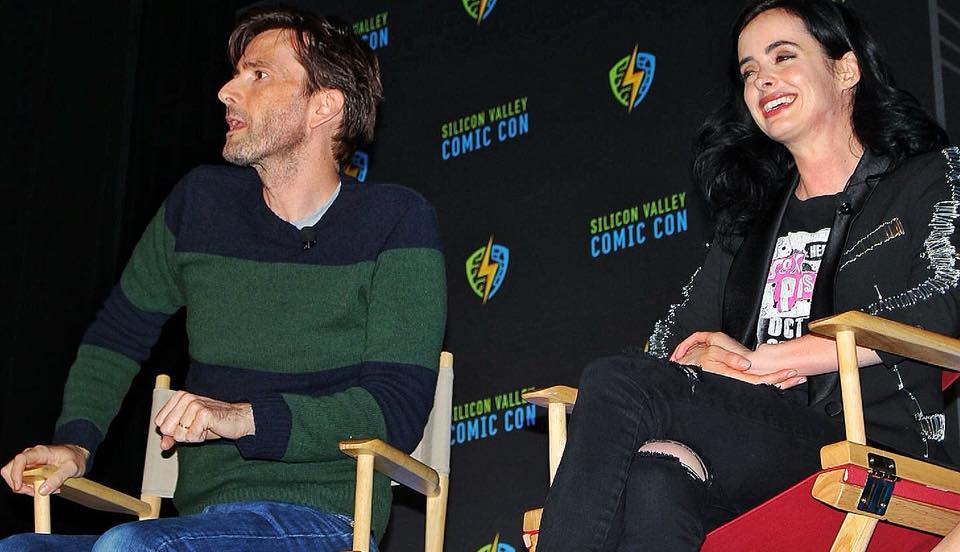 The second season of Marvel’s Jessica Jones was released last month to high praises from both fans and critics. In a special treat for fans of the series, David Tennant along with Krysten Ritter were at Silicon Valley Comic Con to share their thoughts on the show and more.

David Tennant & Krysten Ritter Take to the Stage to Talk Jessica Jones and More was a panel that featured the two performers and was hosted by Dana Han-Klein. This was one of the most popular panels during the convention as the line had started to build up the moment attendees were allowed to be seated for the previous panel. When everything was set, the stars of the hour were introduced on stage.

David Tennant discussed what it was like to work on his upcoming film, Bad Samaritan (which was screened at SVCC). He specifically went into details of working with Dean Devlin and the family atmosphere of the team due to their previous work on The Librarian. He also went into details on how he prepared for the role of Killgrave along with sharing his thoughts on some of his other works.

Krysten Ritter shared her thoughts on the challenge of playing Jessica Jones, as the show was the first live action depiction of the character. She also went into details about the dedication that Tennant had in his role along with her shortcomings when trying to bring the character to life.

Following the discussion, the floor was open for the audience to ask any question they like.

One attendee asked what is the weirdest request they have ever been asked by fan, which opened the flood gates for some interesting stories. Ritter has noted that a lot of fans of Jessica Jones have ask her to punch them (specifically their arm). Tennant recalled the time a fan asked for an autograph while he was in the shower at a hotel gym.

Even though the panel was suppose to be a focus on Marvel’s Jessica Jones, a lot of the questions for David Tennant were more about his role as the Doctor. Fans got to learn what it was like for him take on the role of the Doctor and the pressure that came with playing the role. Also; fans learned a very important lesson – never refer to Tennant as “one of your favorite Doctor” (he has to be your favorite).

David Tennant & Krysten Ritter Take to the Stage to Talk Jessica Jones and More was one of many panels during Silicon Valley Comic Con 2018 that looked into iconic works of pop-culture from the perspective of the performers.

This special report is part of 8Bit/Digi‘s coverage of Silicon Valley Comic Con 2018. If you attended the event or comic con, please share your thoughts in the comment section below.