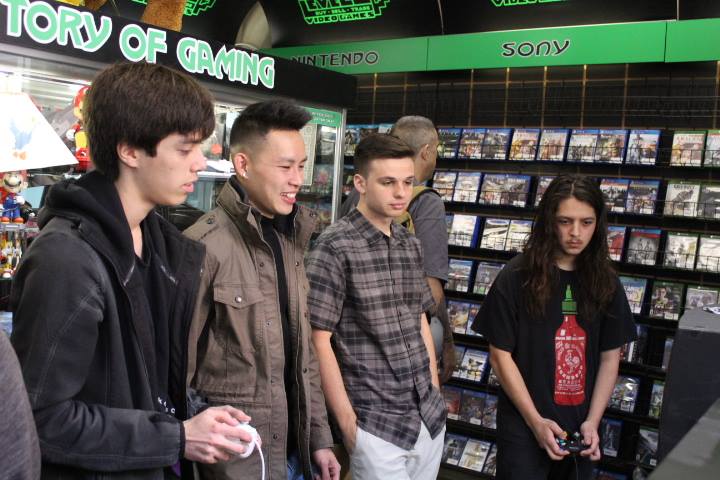 It was a refreshing Saturday afternoon and it was perfect for the gamers who came from all over the Bay Area to Level Up Video Games in Downtown Santa Cruz for their annual Super Smash Bros. Melee Tournament on October 8th. It was a competition that welcomed professionals, enthusiasts and those who are new to competitive gaming.

Returning champion Jose Silvestre, who won Level Up first Super Smash Bros. Melee Tournament on 2013, was present along with his brothers Rubin and Miguel. The one fear they all had was having to go against each other in the tournament.

One of the most experienced players at the tournament was Alvin Nguyen, a San Mateo resident who has played professionally across the country. Yet when asked how he felt before the event, he said that even though he is confident in his skill the competition looked fierce.

The Super Smash Bros. Melee Tournament had 18 players battling in a sudden death game that was setup based on EVO rules. Each round was 8min and players who are defeated in two rounds are eliminated from the tournament.

Van Swanson and Kenny Luu were among those who were victorious in their first round but were eliminated after their second and third round. Both of them have been playing for almost a year Super Smash Bros. Melee and have just started playing competitively. After the elimination both of them could be found playing against each other at a friendly station.

Aaron McAnerney was one player who plays the game casually and was competing in a tournament for the first time. To his surprise however, he won his first two rounds before being eliminated first by Alvin Nguyen then by Rubin Silvestre.

One of the most talked about players during the tournament was Widlar Van Phan (also known as Weedlar) for his skill with Yoshi. As noted by many players, Yoshi is not a very popular character to play with hence many gamers don’t have that much experience battling against someone that does use Yoshi. This of cores gave Widlar an advantage over other players.

The tournament concluded with a battle between Alvin Nguyen vs. Jose Silvestre and Widlar Van Phan vs. Ryan Modelin. After an intense battle; Alvin defeated Jose, pushing him into the second bracket, while Widlar defeated Ryan and eliminating him from the tournament. The semi-final round was a battle between Widlar against Jose resulting in the latter being defeated

The final battle had Alvin Nguyen (playing with Fox) going against Widlar Van Phan (playing with Yoshi) in an intense match. It all comes to an end with Alvin winning the tournament while Wilder secured the second place spot and Jose in third place.

Jerry Abreu congratulated all three champions while presented Alvin with the 1st Place prize of an Xbox One along with five games and a one year subscription to Xbox Live. Widlar Van Phan and Jose Silvestre also received their own prize along with an official Level Up T-shirt.

If you had a chance to check out the Super Smash Bros. Melee Tournament, share your story in the comment section below. I would also like to thank Jerry Abreu and the staff at Level Up Video Games for be being an outstanding host.