Paradise Killer is the perfect blend of a crime thriller with a fantasy adventure that embraces the culture of the indie game community.

Murder and Conspiracy in Paradise

At first glance, Paradise Killer looks like an art house game posing as a detective story. Detective games alone are a dime a dozen and it takes a lot to stand out from the crowd. It’s only after (literally) diving head first into the story, you really want to explore this off beat world, find the clues and seek justice for the victims of a heinous crime. The game stand out because it embraces the indie game culture ( this is in regards to story, gameplay, soundtrack and design choices).

Paradise Killer is not your average crime solving game. It also does a lot to stand out from titles that have defined the genre. The game has its own thing going for it and it works to its advantage. The end result is you’re put in the role of an unforgettable detective and you will meet a number of memorable suspects.

Lady Love Dies is on the Case

Welcome to Paradise Island, a world outside of reality that invites all kinds of creatures and demons. However all is not right as the entire Council is murdered on the birth of Perfect 25 (a new island). In a desperate attempt to solve the mystery and restore order,  the “investigation freak” Lady Love Dies is brought out of exile. She is tasked with uncovering what happening and save the island. Upon her arrival, all is not what it seems and signs of a sinister conspiracy are obvious.

Paradise Killer from other mystery games is the blend of art house aesthetics with a heavy sci-fi /fantasy elements. In doing so, players are tossed into a colorful world populated by characters who are very lively. Lady Love Dies alone has a dominating personality with a side of passion and charm. Yet each character encountered leaves their own mark on the player.

The open world is the right size and easy to traverse through. It’s not unnecessarily massive, just the right size for your investigation. Which is good since you will be doing a lot of back tracking. Do expect to go back to each suspect and question them again after finding new evidence. You are encouraged to look everywhere and question everyone.

Finally, one can not ignore the games killer soundtrack as it helps set the mood for the world.

A Killer in Paradise

The numerous issues that plague Paradise Killer comes down to one factor, part of the game still feels like it’s in Early Access. From some of the level design choices to text fonts and controller layout, it doesn’t feel polished. To its credit, the game isn’t broken (I’ve have not encountered any game breaking bugs). I just feel some more polishing would have been helpful. These issues are not the charm or qualities of an indie game.

One gameplay choice that I found annoying was the lack of an auto-save. There are save booths set up through out the world. However there are moments when an auto-save would have been much obliged.

Despite these shortcomings, it should not deter anyone who is a fan of detective and crime solving games. Paradise Killer is an unorthodox approach to the genre and it has paid off. Lady Love Dies is an unforgettable character and you will want to spend as all the time you like to solve this case.

The Game is Afoot

Paradise Killer is the perfect blend of a crime thriller with elements of a fantasy adventure that embraces the culture of the indie game community. Take on the role of Lady Love Dies and explore the world of Paradise while seeking justice for the victims of a horrendous crime. 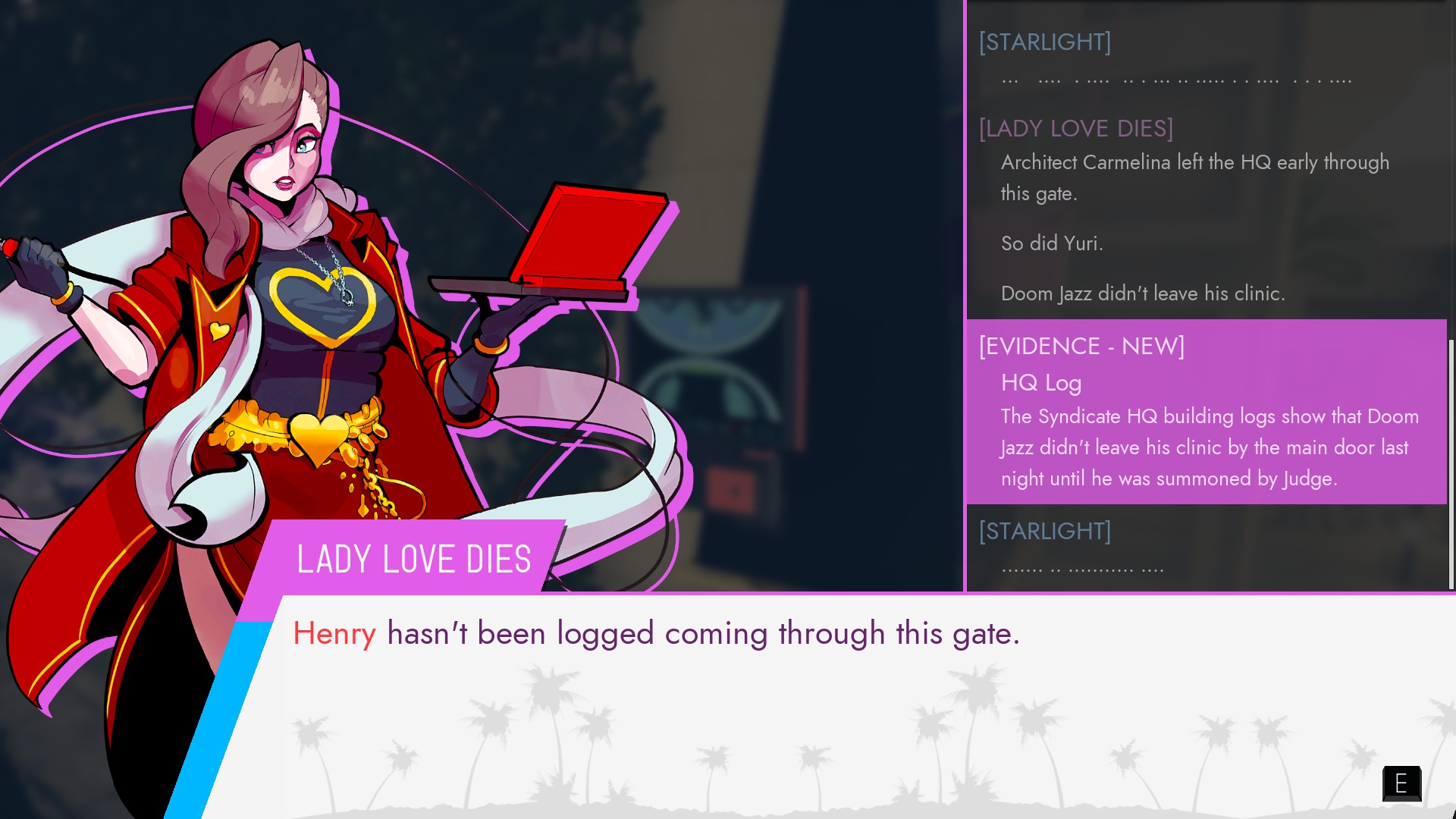