Junji Ito presents a different interpretation of Osamu Dazai iconic work of literature with the manga adaptation of No Longer Human.

A Collaboration of Two Minds

Osamu Dazai is hailed as one of the greatest authors of 20th Century Japanese literature. Junji Ito is praised as one of the most iconic horror mangaka. So when a master of horror brings his own interpretation of an iconic work of literature, the result is a manga adaption of No Longer Human.

Junji Ito is no stranger to bring his own interpretation of iconic works (as demonstrated by his adaptation of Frankenstein). However this one is a little different since No Longer Human is not a work of horror. Instead, the turbulent life journey of Ōba Yōzō is depicted in a horrific way.

The end result is another brilliant work by Ito while Dazai work is presented with a different interpretation.

The manga adaptation of No Longer Human follows the life of Ōba Yōzō from childhood up until he takes his own life. He is born to a life of privilege but is unable to understand or connect with others. In attempt to develop a sense of interpersonal connection, he creates a clownish personality. At first it seems harmless and he succeeds in winning over the people around him. But later in life his antiques have consequences as they lead to the death of several people.

These deaths would haunt Yōzō later in life and set the groundwork for his destructive path. He befriends several artists who introduce him to a series of vices (like prostitutes and heroin). Overtime he is expelled from the school while having numerous run ins with death.*

*Note: This synopsis is based on the Junji Ito adaptation and not the original novel. Hence there are some major differences.

The manga adaptation of No Longer Human is Junji Ito way of presenting a new interpretation of an iconic story.

Ito is no stranger to bring his own interpretation of iconic works (as demonstrated by his adaptation of Frankenstein). However this one is a little different since No Longer Human is not a work of horror. Instead, the manga adaptation takes the reader down a terrifying path. This adaptation is instead presented as a work of psychological horror as we the reader are taken down the rabbit hole.

By using his artistic style, the depict of self-destruction and addiction are presented as a horror of its own nature. While works like Fear and Loathing in Las Vegas have glamorized this, here it’s presented as something to be feared. What should be disturbing is made even more terrifying with Ito’s artistic style. Human nature will always be one of the most vicious demons and its highlighted more so in this adaptation.

The few uses of color leaves an impact on the reader. Like in Schindler’s List, scenes of color are rarely featured but when they are it has an impact. While manga’s tend to be printed in black & white, the rare use of color has a purpose for the moment.

Those unaware of the stories themes and subject matter should be warned. This is going to be a difficult manga to read. It’s also more difficult if you have either experienced it or seen it in your own life.

The stories subject of addiction, depression and egotism mixed with Ito’s artistic style make it a difficult manga to read. This was not a story I could power through or read none stop, at times I had to put it down to take a mental break. These are not easy subjects to and sometimes we want to put our head in the dirt and ignore it. If you have friends or loved ones who have battled these in their life than you understand it all too well.

On a personal level, I have either experienced or witnesses others experience these moments during my career. Being a writer you will meet people like Yōzō who are battling their own demons or whose egotism brings destruction to those around them. Hangout with a stand up comedian and they will have a story that involves using laughter to mask their depression or anxiety. Also lets be honest, we have all meet a pretensions artist or musician whose only real talent was with a needle.

Those of us who are of the creative nature have been like Yōzō at one point. Thankfully many of us have been lucky to either avoid or escape that downward spiral.

Despite its relatable themes, Junji Ito’s adaptation of No Longer Human is a story that must be read. Fans of the mangaka will enjoy how he turned a story of addiction and depression into a work of psychological horror. Literarians will respect how another artist has interpreted a classical work of modern Japanese literature.

Junji Ito presents a different interpretation of Osamu Dazai iconic work of literature with the manga adaptation of No Longer Human. Readers are taken down a path of self destruction that is presented as a demon of its own nature that is all too real for so many.

Disclaimer: Viz Media provided the manga used for this review. 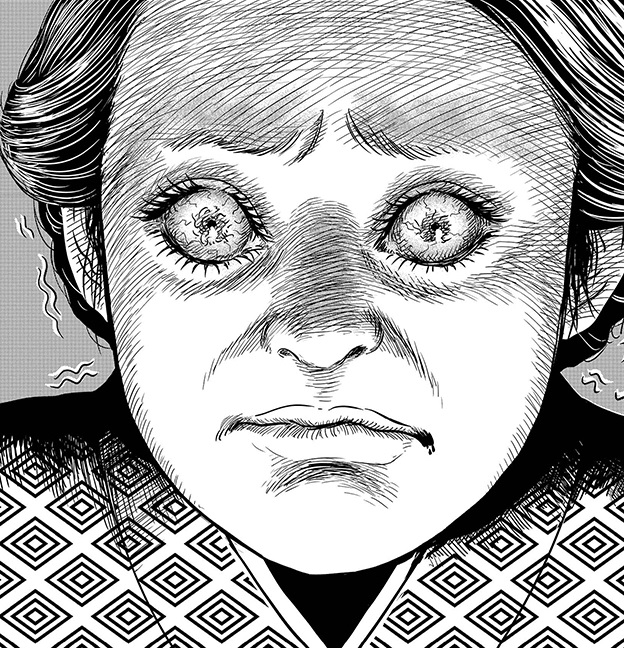