No Guns Life embraces the best tropes of the cyberpunk and noir genre while also standing out for its originality.

No Guns Life is a neo-noir cyberpunk thriller that follows in the tradition of classics like Blade Runner. The first volume of the manga series by Tasuku Karasuma embraces the best tropes of the genre while also standing out for its originality.

I will admit that it was the bad-ass looking cover that first got my attention. It was starting on page that I came to the recognize it as a great work of cyberpunk. As a fan of such works, I found it so encapsulating that I stopped to a break at the start of Chapter 4 during my first read through. Also; I’m really excited for Cyberpunk 2077 and so I’ve been on a massive cyberpunk binge lately.

This is a look at how No Guns Life (Volume 1) by Tasuku Karasuma follows in the tradition of other great works of cyberpunk while also adding its own contribution to the genre.

No Guns Life is set in a dystopian world that has gone through a major war but the peace has brought a new host of problems. Among the biggest problems is the tension between people and the Extended (humans who underwent advanced modifications during the war). Making matters worse is the influence that the Berühren Corporation has while continuing to profit from the horrors they have created.

The story follows the journey of Juzo Inui, the most well known and feared Resolver (a private investigator that resolves issues regarding Extended). On the side, he has been trying to regain the memories of his past life while trying to find out who replaced his head with a gun. During one investigation, he stumbles

Out of control technology, evil corporations and a dystopian urban world are the spots on “cyberpunk bingo” that get checked off. These basic tropes of cyberpunk dystopia makes up the foundation for No Guns Life. However they don’t actually define as the story and the many characters presented take readers on a unique journey. I really did get invested in the journey of Juzo Inui (who is one amazing badass) along with other characters like Tetsurō Arahabaki. Like so many other artist, it pays homage to past works with little nods that true fans will notice.

As much as I enjoy the genre staples, I will also admit that sometimes this didn’t work to its advantage. No Guns Life has a lot of what makes the cyberpunk genre amazing but it also has its moments that are more of an annoying cliche. Also, I will admit that there are times were the action could be hard to follow and you may have to go back and re-read it for clarity.

Despite these shortcomings, No Guns Life is a must read manga that was clearly written for cyberpunk fans.

Life After the War

No Guns Life embraces the best tropes of the cyberpunk and noir genre while also standing out for its originality. Tasuku Karasuma has created a stellar thriller in a world readers will know all too well.

Disclaimer: Viz Media provided the manga used for this review. 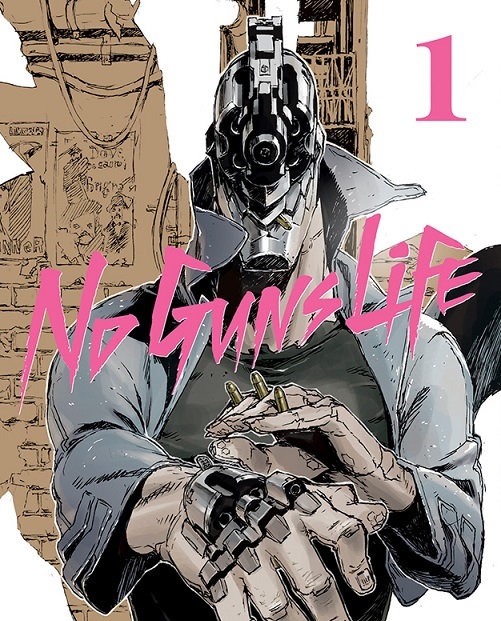