Resident Evil has become one of the most iconic games while setting the standards for the genre. The game was the brain child of Shinji Mikiami, who was inspired by the game Sweet Home and the works of horror film icon, George A. Romero. The story itself has been hailed as one of the most memorable in gaming and has influenced the countless other horror games that followed.

Released back in 1996, the series has grown to become staple of pop-culture while setting the bar for the genre. Meanwhile the original has been remade and re-released on several occasion to ensure that the next generation will continue to experience the horrors of the Arklay Mansion.

The story follows S.T.A.R.S (a special unit of the Raccoon Police Department) as they are deployed to investigate a series of murders outside the city. However, the team is forced to take refuge in a mansion after being attacked by a pack of Cerberus (zombie dogs). From this point is when the real nightmare begins as Chris Redfield and Jill Valentine work to uncover the secrets of the Umbrella Corporation.

Following in the footsteps of Romero, the game uses the setting of a zombie outbreak to facilitate a social critique. While The Dead series attempted to display the evils of racism, Resident Evil focused on themes regarding the lack of ethics in the pharmaceutical industry along with the influence of money in politics and the affects it has on the civil infrastructure. The obvious being how the Umbrella Corporation uses its influence to control the Raccoon City government.

At the same time one could call Resident Evil a modern retelling of Mary Shelly’s Frankenstein that focuses on the moral implications of unchecked scientific research, especially the subject of playing god. The only difference is Dr. Victor Frankenstein research was to help humanity while the Umbrella Corporation was focused on weaponizing its research. 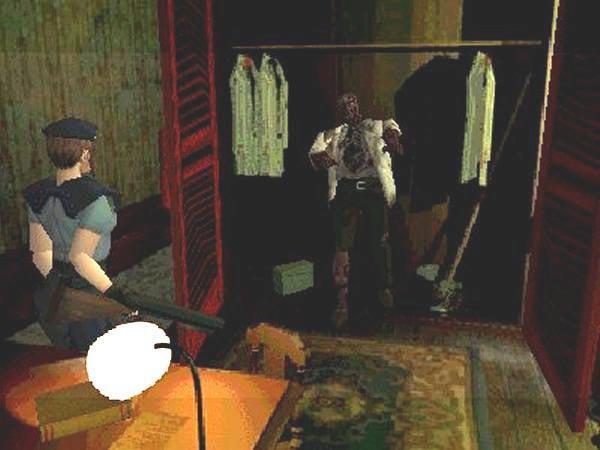 Yet one thing Resident Evil has received little credit for is avoiding the stereotypical gender roles that are common in both video games and horror films. Both Jill Valentine and Rebecca Chambers had a strong personality that made them into respectable feminist icons. At the same time their appearance was not sexualized nor was their role marginalized into that of  “the useless chick” but their character are made to be an actually heroine.

Resident Evil was originally released for the PlayStation followed by a PC and Sega Saturn version. Later, Capcom would release a Duel Shock version followed by a Directors Cut for the PlayStation. The game was remade in 2002 for the GameCube with improved graphics along with a more eerie atmosphere. Meanwhile other gamers had to wait until 2015 when REmake was recreated for the Eighth generation consoles. Its legacy has also survived through its sequels as Resident Evil 2 improved on the original game while Resident Evil 3: Nemesis continued the story. The origins of the outbreak were latter expanded through the story of Resident Evil 0.

It has grown to become one of the biggest gaming franchises while setting new standards as gaming progresses. With the release of Resident Evil 7: Biohazard only a few months away, the series continues to influence the horror games. For any horror fan or gamer; it’s a real shame to have missed out on this classic.

Did you ever play Resident Evil and what are your thoughts on it? Let us know in the comment section.