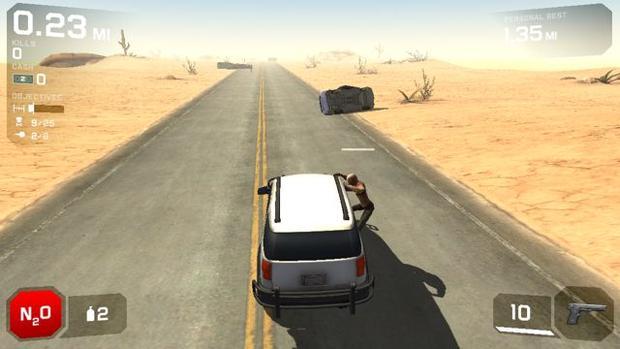 Gamers who enjoy killing zombies but are looking for something different may want to give Zombie Highway 2 a try for a few minutes before moving on to a different game.

Zombie Highway 2 has a simple setup — the player must drive through a post-apocalyptic wasteland populated with zombies. The goal is to reach a destination while killing as many zombies with the vehicle or a simply armory of weapons.

The game is a complete overhaul of its predecessor with improved graphics along with the inclusion of new weapons and content. Controls are easy to learn and function smoothly most of the time.

Despite the upgrade and its setup, the game has a lot of problems that are hard to overlook.

The obvious is that it gets really boring very quick. Running over zombies may seem fun but every gamer has done that in Half-Life 2, Dead Island, State of Decay, or almost any other zombie game that was released in the last few years. Not making the game any fun is the bland and dry scenery of abandon vehicles that fails to impress the player.

Another issue that is hard to overcome are a series of glitches that deter the player from progressing. The patches should have fixed these but other problems were encountered that made the game unplayable.

Zombie Highway 2 will only be fun if one never played the original. Yet with so many other free horror titles available for the mobile platform makes it pointless to waste the time and space for this game.