The Elder Scrolls: Blades for the Nintendo Switch is a fine example of why no studio should bring their mobile game to the consoles.

There needs to be an industry rule regarding porting a mobile game to a console, don’t do it! Most of the time it’s going to be an ugly failure. The Elder Scrolls: Blades for the Nintendo Switch should be the poster child of this new rule. It exemplifies everything wrong with why doing so is a terrible idea (and that is the polite way of saying it).

The Elder Scrolls: Blades attempted to bring everything that made the series an icon to the mobile device. Despite its shortcomings, it worked well because it was developed for mobile gamers. The Nintendo Switch version however seems to think that a game developed around the mobile audience will work for a console.

The answer should have been an obvious no from the start. Bethesda instead chose to go full Leroy Jenkins with this bad idea.

To it’s credit, Blades has some redeeming aspects. For starters, it’s visually appealing thanks to an effort to bring this world to life. The itself story does add to the series massive lore. Overall, everything that has defined The Elder Scrolls as a series is present in Blades. It should be clear that these are also what made the mobile version fun to play.

Despite being on the Nintendo Switch, The Elder Scrolls: Blades still plays like a mobile game. The obvious warning signs are the obnoxious promotions or ways it attempts to push the microtransactions. Being a console game, the quests now feel boring quests due to the repetitive design and sluggish combat.

Honestly, it’s clear that this port was suppose to be appealing to Switch users who game on the go. Unfortunately it ends up being a game that should have been titled “redundancy”. Everyone has a smart phone, so there is no reason to port a mobile game to the Switch. If I have my Switch with me, I’m going to play a real game like Skyrim. Even if my phone can’t play Blades, I’d still rather play a real game on my Switch.

Overall, please stop porting your mobile games to consoles. It has never worked well because it’s still attempting to appeal to mobile gamers.

The Elder Scrolls: Blades for the Nintendo Switch is a fine example of why no studio should bring their mobile game to the consoles. It attempts to bring the experience to the console but it still functions like a mobile game. In the end, it looses any appeal it has of being an enjoyable game.

Disclaimer: This is a free to play game and I got no support from the publisher. 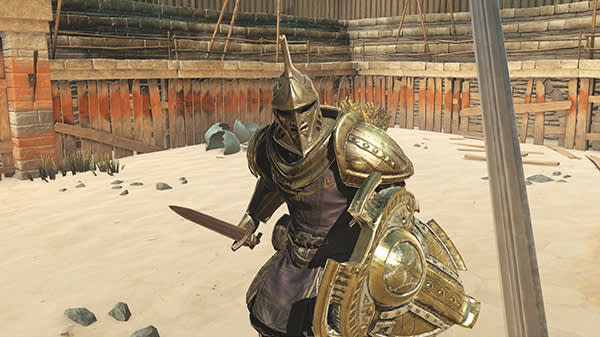