Skip to content
Review | Streets of Rage 4 (Xbox One)
Review

Review | Streets of Rage 4 (Xbox One)

Streets of Rage 4 is a classic beat ’em up that has the retro appeal while also pushing boundaries to make it stand out.

Streets of Rage 4 manages to bring in the latest technologies to create something truly spectacular and unique. The last time gamers got a new entry was around 26 years ago, so having a new entry now shows the dedication of the fandom.

At its core, the idea here is simple, this is a beat’em up. That is what fans will love about this title as it continues the tradition of the series. This is a look at what makes Streets of Rage 4 a must play experience for old school gamers and new fans.

You Found Your Way Here

When you think about Streets of Rage 4, you might not think about more than just a sequence of battles. That’s wrong because the game has a very good story as far as I can see. You need to push the boundaries and defeat a very powerful enemy as well as lots of grunts along the way. There’s plenty of stuff to explore, they also have a wonderful multiplayer that we found pretty incredible.

It’s definitely the type of game where there are many challenges. Yet they are incredibly rewarding and certainly a lot of fun. You can play the entire game with a friend if you want (something that definitely adds to the appeal) It also pushes the experience to the next level in a creative manner.

The battle moves are what really matter here. The thing to note about the game is that you get to enter a variety of locations and you can also interact with the items around you. That’s what we actually find to be really fun, the fact that you can take the items nearby and then use them as weapons. Stuff like this is what adds character to the game and you will find it incredibly interesting all the time as you go alone.

Another thing I like is that there are 17 different characters to choose from. Each one of them has multiple moves, and we found it to be incredibly satisfying. They even have multiple game modes to choose from. But what really matters is the type of special attacks that you are getting and the fast paced gameplay. It’s unlike anything else that you can find out there, and you will be incredibly happy with the way it works.

I’ll be Happy to Oblige

One of the problems with this genre is that they can be inherently difficult. Streets of Rage 4 is the fact that it totally works and it constantly tries to bring in something different. The cool thing is that they give you multiple difficulty options. You can start with the lower ones and then you progress as you go along. You will have higher scores on the higher difficulty settings. They do allow you a variety of different things just so you can explore new ideas and just push things to the next level in a rewarding way.

Old school games like this go with retro graphics. It maintains the same type of aesthetic, but the difference is that you get hand drawn art that feels spectacular. You really feel like being a part of a comic book, and that alone certainly makes a huge difference here. If you want the game to feel and look like the old school one, you can use the retro filter. We see a lot of remasters doing this and it’s actually a unquie concept to check out.

One thing to note is that the main characters and enemies can sometimes have the same color, so if you are surrounded by enemies it can be hard to find them sometimes. So yes, it makes a lot of sense to pick the right character, but even then this is the type of thing that can eventually be fixed.

Streets of Rage 4 is a classic beat ’em up that has the retro appeal while also pushing boundaries to make it stand out. It also has multiple difficulty levels so everyone can play and the fun is pretty much guaranteed (especially with friends). You just need to give it a try for yourself and you will be quite amazed with the value and results being brought to the table.

This review was written by guest writer Alexandru Tanase. He is a freelance writer who enjoys playing video games and has written for numerous publications. The game he used for this review was purchased.

Streets of Rage 4 (Xbox One) 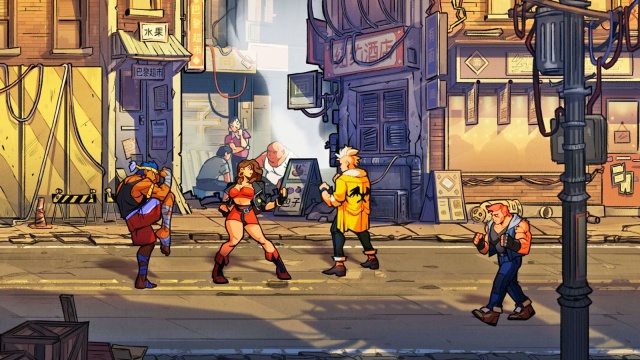