It’s Always Sunny in Philadelphia is a brilliant deconstruction of sitcoms, while The Gang Goes Mobile is a generic mobile game.

As a gamer and fan of the series, I was very hesitant to give It’s Always Sunny in Philadelphia: The Gang Goes Mobile. Then I thought this might follow the shows formula and be a satirical take on the mobile game industry.

After playing it for a few hours, I was dead wrong about this game being a deconstruction of mobile games. Since 2005, It’s Always Sunny in Philadelphia has been a brilliant deconstruction of sitcoms, with many calling it the anti-sitcom. The Gang Goes Mobile however is a generic mobile game that attempts to compensate its mediocrity with fan service.

To its credit, the game isn’t total crap but fans should not expect anything on par with the series.

The Gang are in a Game

The premise is simple, Frank has come across a bag of questionable money and needs to launder it. To do so, the gang invests the money in a variety of business like the bar or Kitten Mittens. However every chapter ends with the money being burned in a dumpster.

The few things The Gang Goes Mobile does right is avoid feeling like a slot machine while including the musical scores from the actual show. The game itself has plenty of fan service from the inclusion of memorable characters to recreating iconic moments from the show.

However none of these positive traits can compensate for what The Gang Goes Mobile truly is, just another generic mobile game. That may not mean much for gamers (since most mobile games are utter garbage) but fans of It’s Always Sunny would expect something that is an “anti-mobile game”.

The Gang Goes Mobile attempts to recreate many classic moments from the show using one premies. While fans will appreciate it at first, the gimmick starts to loses its momentum very quick. That is because using the generic setup of a mobile game can’t work with the nuance of It’s Always Sunny.

As a game on its own merits, it has a fair share of issues. While the gameplay is easy to learn, you’re not really encouraged or motivated to progress. The worst part of all is the visual design of the world, which can only be described as an eyesore (and I feel that is to nice of a way to describe it). The Gang Goes Mobile truly has one of the worst looking visual designs as it looks more lazy than crude.

No gamer will want to download and no real fan of the show should play The Gang Goes Mobile. Overall the game is the equivalent of spoiled rum ham.

It’s Always Sunny in Philadelphia: The Gang Goes Mobile is a missed opportunity to do something brilliant in an industry dominated by controversy and mediocrity. It has its moments at first but they can’t save this dumpster fire of a poor adaptation. 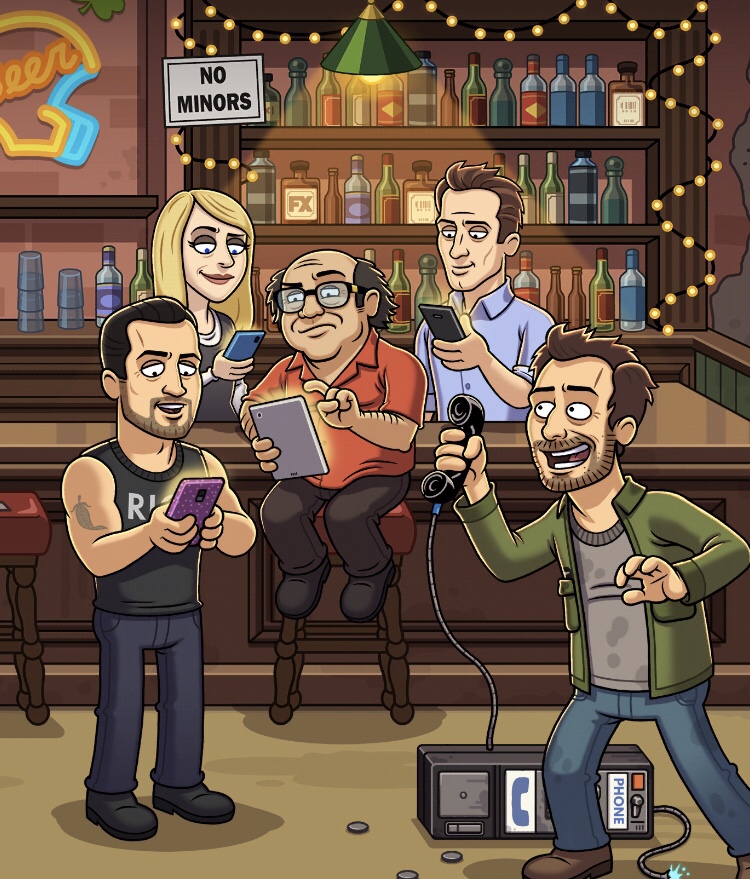