Skip to content
Caper in the Castro has Been Restored
News

Caper in the Castro has Been Restored

One of the first LGBT games has been restored and made available after three decades. 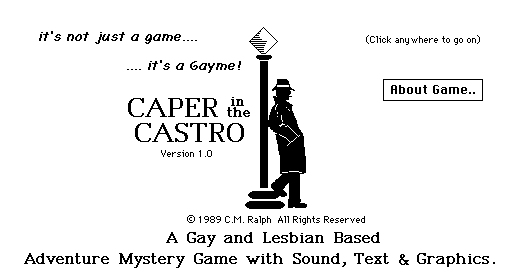 Caper in the Castro was the first LGBT video game ever made and was thought to be a lost title until recently. After being lost for almost three decades, the game has been restored and made available to download.

According to Gamasutra, Adrienne Shaw along with volunteers with the LGBTQ Game Archive have worked to restore this lost classic. Caper in the Castro is now available to download for free and can be played with an emulator.

Caper in the Castro is a point-and-click title was developed by C.M. Ralph back in 1989 and was distributed via BSS. The game was made avalible for free but player were asked to donate to an AID charity. Players take on the role of a lesbian private detective who’s been tasked with solving the mystery of kidnapped drag queen.